How do trusted setups work?


 How do trusted setups work?

Special thanks to Justin Drake, Dankrad Feist and Chih-Cheng Liang for feedback and review.

Many cryptographic protocols, especially in the areas of data availability sampling and ZK-SNARKs depend on trusted setups. A trusted setup ceremony is a procedure that is done once to generate a piece of data that must then be used every time some cryptographic protocol is run. Generating this data requires some secret information; the "trust" comes from the fact that some person or some group of people has to generate these secrets, use them to generate the data, and then publish the data and forget the secrets. But once the data is generated, and the secrets are forgotten, no further participation from the creators of the ceremony is required.

There are many types of trusted setups. The earliest instance of a trusted setup being used in a major protocol is the original Zcash ceremony in 2016. This ceremony was very complex, and required many rounds of communication, so it could only have six participants. Everyone using Zcash at that point was effectively trusting that at least one of the six participants was honest. More modern protocols usually use the powers-of-tau setup, which has a 1-of-N trust model with \(N\) typically in the hundreds. That is to say, hundreds of people participate in generating the data together, and only one of them needs to be honest and not publish their secret for the final output to be secure. Well-executed setups like this are often considered "close enough to trustless" in practice.

This article will explain how the KZG setup works, why it works, and the future of trusted setup protocols. Anyone proficient in code should also feel free to follow along this code implementation: https://github.com/ethereum/research/blob/master/trusted_setup/trusted_setup.py.

A powers-of-tau setup is made up of two series of elliptic curve points that look as follows:

To make a KZG commitment to a polynomial \(P(x) = \sum_i c_i x^i\), we simply take a linear combination \(\sum_i c_i S_i\), where \(S_i = G_1 * s^i\) (the elliptic curve points in the trusted setup). The \(G_2\) points in the setup are used to verify evaluations of polynomials that we make commitments to; I won't go into verification here in more detail, though Dankrad does in his post.

Intuitively, what value is the trusted setup providing?

It's worth understanding what is philosophically going on here, and why the trusted setup is providing value. A polynomial commitment is committing to a piece of size-\(N\) data with a size \(O(1)\) object (a single elliptic curve point). We could do this with a plain Pedersen commitment: just set the \(S_i\) values to be \(N\) random elliptic curve points that have no known relationship with each other, and commit to polynomials with \(\sum_i c_i S_i\) as before. And in fact, this is exactly what IPA evaluation proofs do. 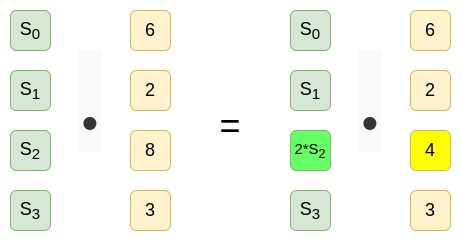 If we want to make an IPA-based proof for some statement (say, that this polynomial evaluated at \(x = 10\) equals \(3826\)), the proof should pass with the first set of base points and fail with the second. Hence, whatever the proof verification procedure is cannot avoid somehow taking into account each and every one of the \(S_i\) values, and so it unavoidably takes \(O(N)\) time.

However, the mathematical relationship has to remain secret: if \(s\) is known, then anyone could come up with a commitment that stands for many different polynomials: if \(C\) commits to \(P(x)\), it also commits to \(\frac{P(x) * x}{s}\), or \(P(x) - x + s\), or many other things. This would completely break all applications of polynomial commitments. Hence, while some secret \(s\) must have existed at one point to make possible the mathematical link between the \(S_i\) values that enables efficient verification, the \(s\) must also have been forgotten.

How do multi-participant setups work?

It's easy to see how one participant can generate a setup: just pick a random \(s\), and generate the elliptic curve points using that \(s\). But a single-participant trusted setup is insecure: you have to trust one specific person!

The solution to this is multi-participant trusted setups, where by "multi" we mean a lot of participants: over 100 is normal, and for smaller setups it's possible to get over 1000. Here is how a multi-participant powers-of-tau setup works.

Take an existing setup (note that you don't know \(s\), you just know the points):

Notice that this is equivalent to:

That is to say, you've created a valid setup with the secret \(s * t\)! You never give your \(t\) to the previous participants, and the previous participants never give you their secrets that went into \(s\). And as long as any one of the participants is honest and does not reveal their part of the secret, the combined secret does not get revealed. In particular, finite fields have the property that if you know know \(s\) but not \(t\), and \(t\) is securely randomly generated, then you know nothing about \(s*t\)!

To verify that each participant actually participated, each participant can provide a proof that consists of (i) the \(G_1 * s\) point that they received and (ii) \(G_2 * t\), where \(t\) is the secret that they introduce. The list of these proofs can be used to verify that the final setup combines together all the secrets (as opposed to, say, the last participant just forgetting the previous values and outputting a setup with just their own secret, which they keep so they can cheat in any protocols that use the setup).

Each participant should reveal their proof on some publicly verifiable medium (eg. personal website, transaction from their .eth address, Twitter). Note that this mechanism does not prevent someone from claiming to have participated at some index where someone else has (assuming that other person has revealed their proof), but it's generally considered that this does not matter: if someone is willing to lie about having participated, they would also be willing to lie about having deleted their secret. As long as at least one of the people who publicly claim to have participated is honest, the setup is secure.

To work with these cases, it's often convenient to convert the trusted setup to evaluation form. This would allow you to take the evaluations (\([19, 146, 9, 187]\) in the above example) and use them to compute the commitment directly.

This is done most easily with a Fast Fourier transform (FFT), but passing the curve points as input instead of numbers. I'll avoid repeating a full detailed explanation of FFTs here, but here is an implementation; it is actually not that difficult.

The future of trusted setups

Powers-of-tau is not the only kind of trusted setup out there. Some other notable (actual or potential) trusted setups include:

Cryptography continues to be a rapidly evolving field, and how important trusted setups are could easily change. It's possible that techniques for working with IPAs and Halo-style ideas will improve to the point where KZG becomes outdated and unnecessary, or that quantum computers will make anything based on elliptic curves non-viable ten years from now and we'll be stuck working with trusted-setup-free hash-based protocols. It's also possible that what we can do with KZG will improve even faster, or that a new area of cryptography will emerge that depends on a different kind of trusted setup.

To the extent that trusted setup ceremonies are necessary, it is important to remember that not all trusted setups are created equal. 176 participants is better than 6, and 2000 would be even better. A ceremony small enough that it can be run inside a browser or phone application (eg. the ZKopru setup is web-based) could attract far more participants than one that requires running a complicated software package. Every ceremony should ideally have participants running multiple independently built software implementations and running different operating systems and environments, to reduce common mode failure risks. Ceremonies that require only one round of interaction per participant (like powers-of-tau) are far better than multi-round ceremonies, both due to the ability to support far more participants and due to the greater ease of writing multiple implementations. Ceremonies should ideally be universal (the output of one ceremony being able to support a wide range of protocols). These are all things that we can and should keep working on, to ensure that trusted setups can be as secure and as trusted as possible.